All the way from Holland (and Flanders)

For several years now, I have been recording Dutch rubbish (and some from Flanders, Dutch-speaking Belgium) washed up on Suffolk's beaches. As a British and Dutch dual national and Dutch speaker living in Suffolk. I am particularly interested in the writing on this flotsam and jetsom from over the North Sea, which often gives clues to where exactly this washed up rubbish has come from. 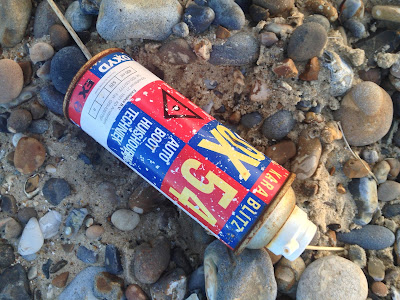 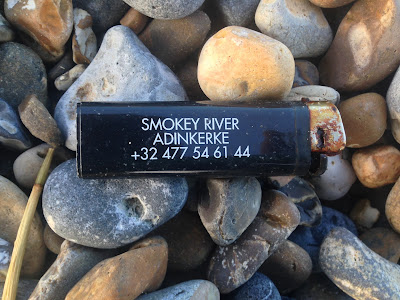 Complementary cigarette lighter from Adinkerke, a seaside village on the Flemish (Belgian) border with France. Adinkerk is where Brits go to buy Belgian tobacco. Tobacco duty in Belgium is lower, and the village is full of giant tobacconists. I've checked, the lighter floats! I once found two of these on Dingle Beach on the same day. 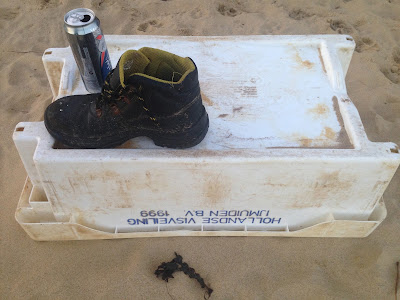 Crate for Holland Fish Auction, Ijmuiden. Ijmuiden is one of the closest Dutch harbours to the East of England, it's where most of the yachts that sail to Suffolk depart from. Found on Covehithe Beach, December 2014 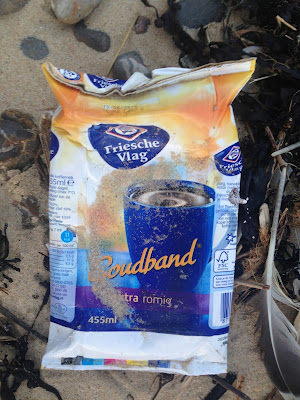 "Koffiemelk" (coffee creamer), gold band "extra creamy". This is the popular Friesche Vlag (Fries Flag) brand, for Friesland in the North of the Netherlands. Found on Covehithe Beach, December 2014. Most Dutch people drink this stuff, rather than milk, in their coffee. 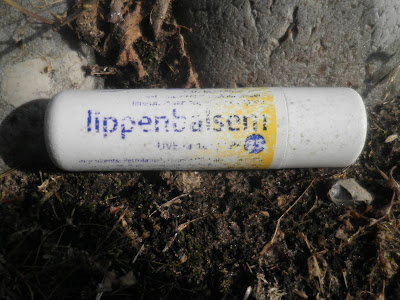 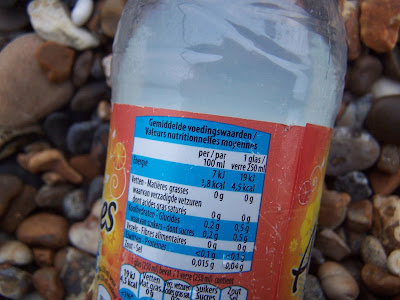 "Nutritional content" information on a Belgian fizzy orange drink bottle, in both Dutch and French. Between Walberswick and Dingle Beach, May 2014. 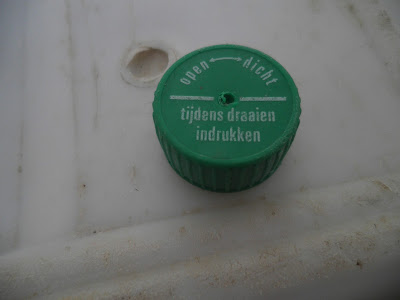 Dutch-language safety cap, stamped with OPEN/DICHT (open/close) and "Tijdens duwen indrukken" (press in while turning). Between Dunwich and Sizewell, summer 2013.

Most of the items I've found that have come all the way from Holland are milk cartons - those with still legible sell-by dates on them are at least six months old, so they've taken a while to make the voyage of around 90-120 nautical miles over the North Sea to Suffolk's beaches. A lot of these cartons of "halfvolle melk" (semi-skimmed milk) are from local dairies in Noord Holland (North Holland) - the province of the Netherlands that you'd come to if you sailed in a straight line from the Suffolk coast. Some cartons - like the Melken brand semi-skimmed vanilla yoghurt carton below - are from dairies in Zuid Holland, a little bit further down the coast. 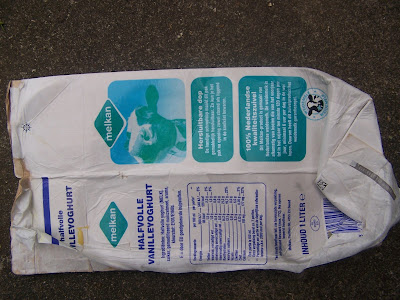 Melkan vanilla yoghurt from Beesd in the province of South Holland proudly declares that it's made from milk from cows that have been eating grass in a field for at least six hours a day for the past 120 days.

Milk cartons aren't the sort of thing you'd take to the beach with you and you'd be unlikely to take milk cartons with you on a sailing boat unless you were on a long voyage all the way to England. Dutch people on short sailing trips would be more likely to take "koffiemelk" (coffee creamer, see above) that they drink with coffee (they don't drink milk in their tea). Coffee milk keeps better.

A sailing trip to bring over a boat to Suffolk would take around 22 hours on a summer night, according to the two sailors I met at Walberswick Harbour last summer, who took that long to sail their brother-in-law's boat from Ijmuiden. 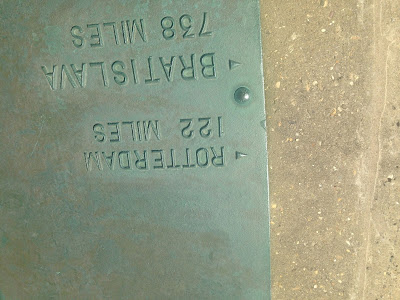 Directions to the Netherlands' major cities are given on the Euroscope, the monument marking the mainland UK's easternmost point at Ness Point, Lowestoft. There's also a sign pointing out to sea and to the nearest Dutch and Belgian ports outside the Seaman's Reading Room at Southwold (below). 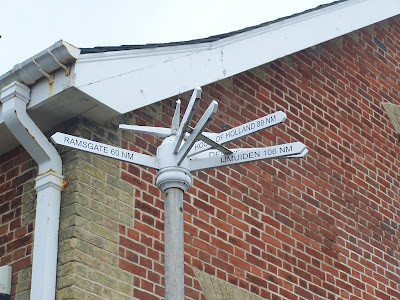 Some items originating in the Netherlands that end up washed up on Suffolk beaches could have been lost overboard on sailing boats. There's a fair amount of tubes of lubricant for boats and their engines, and I've found one safety top of some kind of container with a Dutch-language version of the "press inwards while twisting off" screw-top. Also notable are the crates stamped with "property of Holland Fish Auction, Ijmuiden" and "Property of Fish Store Holland Northern" (Eigendom Vis Afslag Hollands Noorden). I looked up this particular fish cold storage facility online and it's in the relatively small fishing port of Den Oever, which is right down the coast from Den Helder, a big Navy port. Were a crate to fall off the side of the docks at Den Helder or Den Oever and be swept out to see, coastal Suffolk is where it would end up. 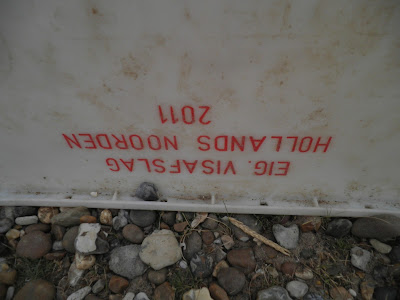 This crate from the Den Oever fish cold storage facility, used by the local fishing fleet to store their catch when it's landed, was at the "Plastic Palace" between Dunwich Heath and Sizewell Beach in the summer of 2013. 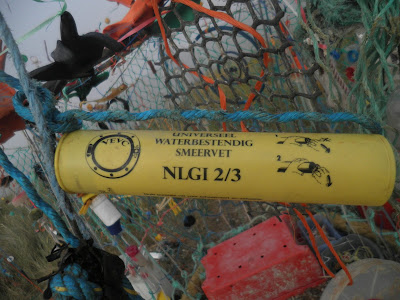 The Dutch-language lettering on this tube of lubricant reads, "Universal Water-resistant Spreadable Grease." It presumably fell off, or was discarded from, a boat. Found between Dunwich and Sizewell, 2013.

And there's also packaging from Belgium washed up on Suffolk's coast - from Flanders (Vlanderen) the autonomous Dutch-speaking region of Belgium that occupies the coast. Most Belgian packaging (and some Dutch packaging, destined for the "Benelux" market) is in Dutch and French. Notable among the Belgian rubbish ending up on our shores are the cigarette lighters from Adinkerke, where Brits go after they've filled the van at Calais with alcohol. Adinkerke's right on the French-Belgian border and cheap tobacco, with a lower level of duty, is what they're after. Whether Adinkerke lighters have washed up on Suffolk Coastal all the way from the Flemish coast, of whether they were dropped over the side of a Channel ferry on its way into a ferry port on the South coast is unclear. (I'm in contact with an oceanographer who can talk me through the sea currents between the Low Countries and Suffolk.) 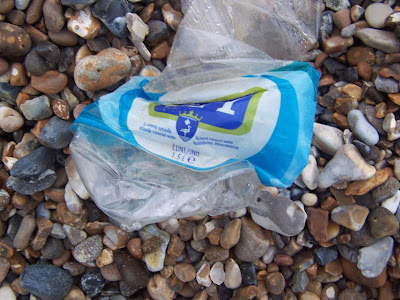 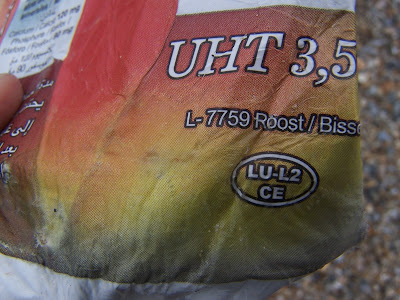 How this milk carton from the landlocked Grand Duchy of Luxembourg, inland from Belgium, came to be washed up on Southwold Beach in June 2014 is a bit of a mystery! Luxembourg does have a river fleet that cruises the major Belgian waterways carrying freight all the way to the sea at the Belgian port of Antwerp, so it may have reached Southwold through that route. 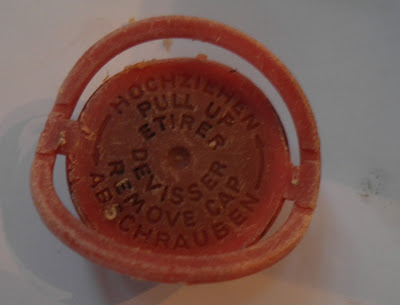 And here's an oil cap all the way from Germany, found between Dunwich and Sizewell in 2013. It would have had to drift quite a long way south to arrive in Suffolk 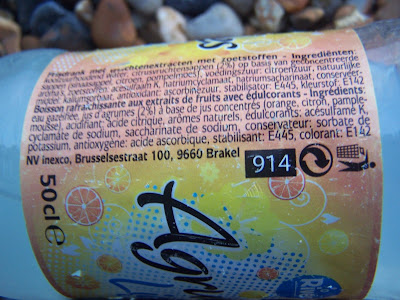 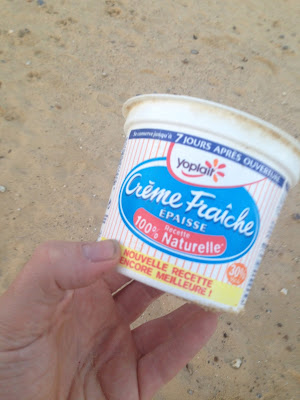 Et viola! Creme fraiche apparently all the way from France, in an exclusively French-language carton. This one was found in Covehithe in early 2014. The majority of foreign finds on Suffolk's beaches, though are Dutch. Beachcombing one day in early 2015 between Dingle and Walberswick, about half the items I found whose origin was identifiable were from the Netherlands.

This list of ingredients on a carobonated fizzy orange bottle found in Dingle (above) in early 2014 is in French and Dutch, but four-figure postcode starting with a 9 identifies it as coming from Brakel in Gelderland (southeast Netherlands). Amsterdam postcodes would start with "10", for example. 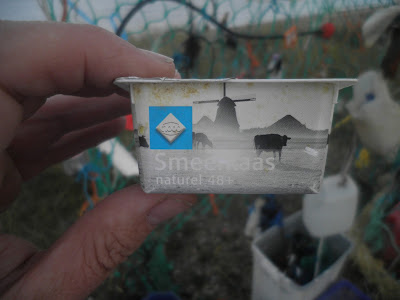 Typically Dutch: Fresian cows grazing the fens and a windmill feature on this carton of Smeek cheese spread. The Dutch do love their dairy products! This one was on display at the "Plastic Palace" just south of Dunwich Heath in 2013.

There's plenty more where that came from! And plenty more photos. I haven't come across any Dutch rubbish on Suffolk beaches for many months, though. Most of my finds have been in remote stretches of the coast between beaches where people go, or in largely deserted beaches like Covehithe, and off-season, when there are long intervals between beach-cleans. I suspect that many of my finds were left over from various tidal surges that flooded the Suffolk coast, or "overtopping," and I have a theory that Dutch residents along the coast had dutifully put their cartons in the correct recycling bins one winter's night, only for these to be swept out to sea by a sudden tidal surge.

Stichting De Noordzee (The North Sea Foundation), the national charity that help organise beach-cleans up the Dutch coast and on the beaches of "the islands" to the North, has a report from the 2014 and 2013 "National Beach-clean Tours" on its website.

Last year, the most frequently found bits of rubbish were fishing line and netting, balloons with string attached, and little bits of plastic. Based on the 2013 Beach-Clean Tour, they estimated there were around 514,000 bits of fishing line lying around on the Dutch coast.

There was also "a great increase in the quantity of tops of plastic bottles observed." Thousands of plastic tops were gathered during the National Beach-clean Tour, and these were made into a 2.5-metre sculpture named "Capman."

On tourist beaches, there was a lot of packaging for drinks and sweets, cigarette ends and plastic bags. On "non-tourist" beaches, "maritime" items were found: wooden pallets, jerrycans, cleaning fluid and paraffin (containers?) accounted for the biggest share of the rubbish.

I've parked this draft article here as I'm making some pitches - one for a project in Suffolk - possibly a small travelling exhibition or series of talks or activities in schools, or both. I also hope to approach East Anglian print media, as well as print media in the Netherlands, where "the environment" is always a very hot topic.