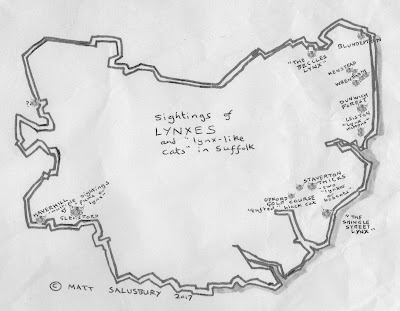 Mystery Animals of the British Isles: Suffolk should be out soon - I'm currently grappling with pdf pre-sets for print and the pagination. Here's on the last illustrations I've done for it, a map of sightings of "lynx-like cats" in Suffolk.

I've heard testimony from several people recently who've seen big cats in Suffolk, regrettably in most cases these won't make it into the book, it's just not possible this late in the day to squeeze in additions. A taxi driver recalled seeing a black leopard in Wrentham about ten years ago (there have been other such cats in the neighbourhood), a local woman thinks she might have glimpsed a big black cat on the Blyford Road towards Dunwich Forest (again, other sightings locally).

There have also been some curious goings-on involving a video said to have been received by a famous red-top national newspaper of a video of a black leopard from Hintlesham (just east of Hadleigh). For whatever reason, it's not been published and the journalist concerned hasn't got back to me.

I'm still surprised to be receiving testimony from people whose family members (usually their dads or grandads) claim to have had encounters with Black Shuck. The latest was from a man from Rattlesden (near Bury) who says his dad "many years ago" collided with Black Shuck one night on the A140 somewhere between Ipswich and Stowmarket. He got out to take a look, and found... nothing. He also described, in daylight the next day, finding some strange deposit "like eggshells" on the bonnet of his car.

I'll keep you posted on the progress of the book, with hopefully an announcement before too long. Meanwhile, you can follow developments at @MysteryAnimals on Twitter.
Posted by Matt Salusbury at 03:01