Watching more and more Labour posters go up in Suffolk

FOR THE past few weeks I've been watching with some amazement as yet another Labour poster appears in a new window of yet another house in a particular street in the town of Halesworth, North Suffolk. That's right – Suffolk. Predominently rural Suffolk, in the ultra-safe Tory seat of Suffolk Coastal. Halesworth (population 4,700), just "the wrong side of the A12" – just far away enough from the coast to keep it from being part of the playground of the second-home owners, comes under the slightly more Labour-leaning Waveney District Council jurisdiction, but it's on the northern edge the ultra-safe Tory Suffolk Coastal Parliamentary constituency. 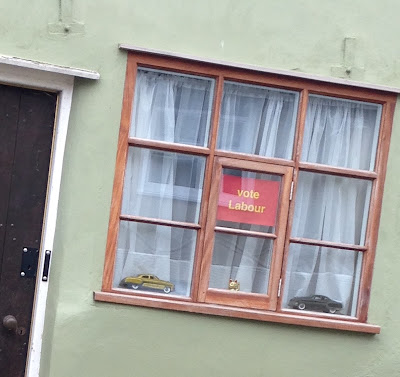 Normally at election time there are Conservative boards to be seen everywhere round here, usually big ones put up on the edges of big fields by the main road by local landowners. There were a lot of "Leave" signs in the fields on the edges of the big estates last June. This time round they are conspicuous by their absence. I suspect it's not vandalism, they may not have gone up in the first place this time round.

In the seaside village of Dunwich (over 30 per cent of households were second homes at the last count), all the boards in evidence are Lib Debs. But in Halesworth, the gradual accumulation of Labour posters in windows has been really noticeable. In a part of the world where a temporary traffic light put in on a village lane for some roadworks becomes a conversation starter, the appearance of even one Labour poster is a bit of a big deal. At first they appeared in the first floor windows of houses set back a bit from the road, not all that visible. Then, the next day, another. Then another. Then a sort of "Labour window" of a poster, some newspaper articles dissing Theresa May's record on the NHS, and some unfurled local leaflets presenting Labour's candidate for Suffolk Coastal, a young firefighter from Felixstowe named Cameron Matthews.

Matthews is up against till recently seemingly unassailable Dr Therese Coffey MP, widely derided by her constituents whatever their allegiance of lack of one. Dr Coffey has a majority of 25,000 and now serves as Undersecretary of State for the Environment and Rural Affairs. Like Margaret Thatcher, she was a chemist in the confectionary industry (for Mars). Dr Coffey is from Liverpool, she's still a passionate Liverpool FC fan (so no Suffolk origins then). Her candidacy for ultra-safe Suffolk Coastal was a reward for serial defeat in Parliamentary and European Parliament elections. This is in a seat where most candidates even for District Council elections put something along the lines of "born and raised in Suffolk" on the front of their leaflets if they can.

Private Eye noted Dr Coffey's role in ensuring the future of England's only Oil Transhipment Area, just off the pristine coast of Southwold, where mostly Russian tankers transfer oil to smaller vessels heading for the shallower waters of the Baltic. Also noted by Private Eye are Dr Coffey's famously short MP's surgeries in villages, where she announces through posters that she'll be available on a particular day for all of ten minutes or quarter of an hour, running surgeries practically with the engine still running.

The Conservatives have held Suffolk Coastal since its creation in the 1980s, and the seats that came before it (Sudbury and Woodbridge seat and Lowestoft seat) pretty much since the beginning of time, although Labour took Lowestoft in the landslide of 1945 and held it until the late 1950s. Elections for Suffolk County Council are usually a "blue tide" as well. Labour lost four Council seats in county elections in May, with the annihilation of UKIP accounting for most of the District-wide "blue tide." Suffolk's only upset was in the West of the County, where the West Suffolk Independents took Brandon from the Tories. So confident were the Tories of victory in Suffolk Coastal in the 2015 election that they didn't bother to send a representative to an important hustings in Woodbridge, to the "audible disapproval" from the audience.

It's now the day before the election, and last time I cycled down that street in Halesworth, we were up to two Labour posters appearing in windows per day. One of them appeared to be homemade, just printed in yellow lettering on a red background on somebody's computer printer. The same day, somebody had come round to the picture postcard village with its thatched houses where I live a couple of miles outside Halesworth, and as I was out they'd left some Labour leaflets wrapped around the handle of the front door. My jaw dropped, Labour have actually gone door to door in a deepest rural Suffolk village of 200 people. Labour even showing their face round there is to say the least a surprise. Even more of a surprise was the discovery of a "Never Mind the Bollocks" poster featuring a photo of May with duct-tape on her mouth and Sex Pistols-style ransom note cut-up lettering, taped to a tree on a dangerous bend on the B1123 road out of Halesworth heading deeper into rural Suffolk, a couple of miles from anywhere. 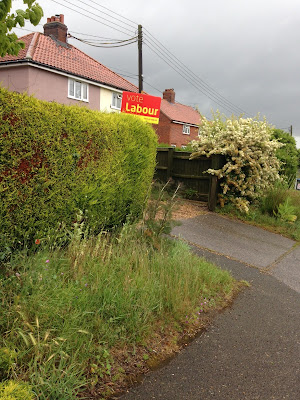 Yes, an actual Labour poster in the village of Westleton, Suffolk!

More surprising still was the sight of a couple of Labour posters in the "best kept village" of Westleton, on the edge of Minsmere and Dunwich Heath nature reserves. You don't get much more picture postcard than Westleton. Prince William and Kate Middleton even celebrated their first wedding anniversary with a weekend staying at the uber-posh Crown pub there. Labour posters in Westleton? Yes, I kid you not!

A quick look at the Rural Labour Twitter feed, though, suggests that all across the country, the sight of picture postcard thatched cottages with Labour boards up in front of them suddenly isn't all that rare anymore. Plus the odd photo of a farmer working in the fields in tractor, which proudly displays a Labour board fixed to its mudguard. (See also @LabourBoards.)

Slightly North of Halesworth, where Suffolk Coastal constituency ends and Waveney constituency starts, I was in the market town of Beccles for market day and I stumbled across the Labour Party stall. Its activists (there was a considerable swarm of them) told me the seat had only been Tory since 2010, the Tories were holding on to a majority of only 2,000, with everything to play for.

Given Labour's huge growth in membership since 2015, with the huge increase in resources that this brings, I found it surprisingly hard to actually track down Labour in Suffolk Coastal. Woodbridge Labour have an active website, one of their folk music benefits in the early spring of this year allegedly had to turn people away it was so busy. My nearest branch is Leiston Labour (the town, home of Sizewell B nuclear power station, had Communist and Labour councillors in an alliance in the 1930s, many Communist town councillors taught at Leiston's progressive Summerhill School. Leiston was at the time known as "Little Moscow.") Leiston Labour has no apparent contact details beyond a Twitter and Facebook page, it took weeks for them to reply to a DM message on Twitter. I was eventually able via the Labour Party's website get the contact details for Labour Eastern Region, who in turn eventually put me on to the Blyth Valley Group nearest me.

I was also a little disappointed when I went on the Labour Party website to look for "local events" and all they had was some door-knocking in Lowestoft, over 40 miles away, only for me to find the next day via Twitter that Jeremy Corbyn was already in Lowestoft and nearby Gorleston (the hospital, just over the border in Norfolk, was facing cuts.) It was clear that Jezza would be ending his lightning tour of the East Coast before I could even get on a train. To be fair, the lady at the Labour stall in Beccles told me they'd only got half an hour's notice of Jezza's visit themselves.

This lack of even the basics, such as actual contact details, was a point highlighted in a report that came out not long after Corbyn won his first leadership election, entitled Labour's Rural Problem _ Winning Again in Coast and County.

The report, prepared by then shadow environment secretary Maria Eagle, followed the Milliband-era Labour Party's poor showing in rural seats in the 2015 election – they lost one rural seat. Labour's Rural Problem claimed one issue is "not just rural voters' perception of Labour, but more crucially Labour's perception of rural voters. This problem goes from the top of the party to the bottom - for too many rurality is synonymous with Conservatism, and engaging with these communities is at best an afterthought, and at worst a complete waste of time." (is "rurality" even a word?)

Labour's rural problems date back way beyond Corbyn. When Labour lost the mostly rural Copeland seat to the Tories in a recent byelection, my reaction was, What? Labour still had a rural seat to lose? Given Blair and then Gordon Brown and their talent for taking the vote of entire regions or even nations for granted (Scotland, Wales, the North, etc.) it was just Corbyn's rotten luck to be around when there was somehow still a rural seat to contest that New Labour hadn't managed to lose already. 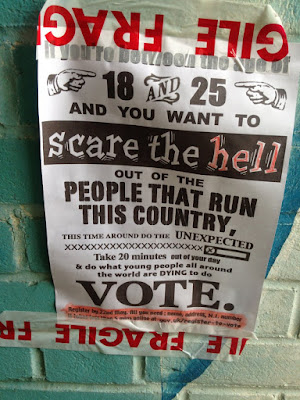 Hand-made "register to vote" poster aimed at the yoof of Halesworth, spotted in mid-May

At the local level at least, though, this time around someone in Labour now thinks it's worth going door to door to leaflet a remote thatched village of 200 people that doesn't even have a proper village hall, never mind a pub, so things may have changed.

Another failing Labour's Rural Problem identified was the tendency of mobilising any of its rural supporters that they did find to go door-knocking in the towns, as if the rural seats were a write-off. The report gave an example of a case where this happened – enthusiastic rural Labour activists were sent to a nearby "marginal" urban constituency to campaign, Labour did appallingly in that town and actually better in the rural constituency they'd emptied of activists (although still not enough to win it.)

As we speak, I've just called Suffolk Coastal Labour (I got their number from Eastern Region, now that I found out Eastern Region existed and they're actually answering the phone.) They confirmed that they're directing supporters in Suffolk Coastal to go to door-knocking on the day of the General Election in the constituency of Ipswich. This isn't because they've written off Suffolk Coastal though, it's because Ipswich been a swing seat or a "bell weather" seat as long as anyone can remember, for so long, in fact that a young journalist called Charles Dickens was dispatched there from London to cover an election, his experiences there inspired him to write The Pickwick Papers. The seat's changed hands eight times in the last century.

Only the dismalness of the then Labour candidate for Ipswich lost them the seat in the 2015 General Election (some had then tipped Labour to take it, they're fighting Ipswich with a different candidate now.) Ben Gummer, the current Tory incumbent, is an impressive foe, though. Like a lot of East Anglian Tory MPs, he's positioned in the green wing of the Tories (yes, they have one!) and his comments in defence of immigrants and against xenophobia immediately post-EU referendum show he's a far from typical Tory.

There's also a more practical reason for rural activists to go door-knocking 30-odd miles away in the County Town. Most of rural Suffolk is "left behind" _ literally. There's so little public transport left in the county. If you haven't got a car, it's actually easier to get to Ipswich than to other parts of rural Suffolk!