My talk on pygmy elephants - on reports of modern sightings from Congo Brazzaville and Kerala, India, and the evidence from the fossil record - from the Centre for Fortean Zoology's Weird Weekend, August 18-20 2008. You'll need headphones or speakers and 59 minutes to see this CFZ TV film. (They gave me an hour, and I took 59 minutes. How's that for timing?)

See the film of my talk here.

Please don't be alarmed by the introduction in CFZ Richard Freeman's unique style, he does that to all Weird Weekend speakers!

There will be an article on pygmy elephants in Fortean Times before long. 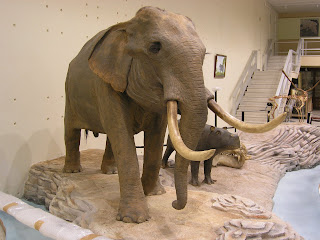 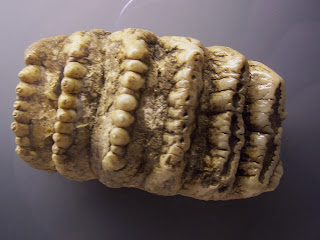 Tooth of a stegadon, an extinct branch of the elephant family, which lived in Asia, including dwarf varieties in Indonesia. Photo © Matt Salusbury 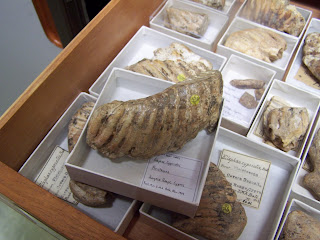 “If any linking theme could possibly be winkled out from the diversity of topics throughtout the weekend, it would perhaps relate to interpretation/classification, providing new ways to approach established subjects or to reassess evidence. This led to some unexpected moments of interdisciplinary content, such as discussing the conventions of Ancient Egyptian tomb painting in relation to pygmy elephants following Matt Salusbury’s presentation on ‘Water Elephants of the Congo.’ The talk opened up a classic type of cryptozoological conundrum. The case for modern pygmy elephants (as distinct from now-extinct dwarf elephants) is reasonable and apparently well attested in both Africa and Asia by local tradition and modern observation. Then you get down to the nature of evidence and the questions start springing up, from the problems of scale in photographs to the bewitching possibility that reported tribes of pygmy elephants may just be gangs of teenagers living outside the herd. That some elephants are noticeably smaller is beyond doubt, but whether this indicates a distinct species, misidentified juveniles or interesting mutations hasn’t been established. There was a lingering touch of regret in Matt’s disclosure that even the pygmy ones wouldn’t be small enough to put on a lead and take on the bus. Any such cryptozoological wistfulness, however, was diffused after the talk by the (mature female) attendee who confided in me that she thought the speaker was a lovely boy ‘without and ounce of fat on him.’”
Posted by Matt Salusbury at 16:28