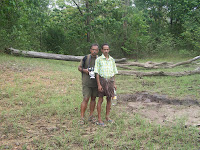 I recently returned from my investigation into alleged “kallana” pygmy elephants in and around Neyyar-Peppara Wildlife Sanctuary in Kerala, South India. These elephants are supposed to have a height of 5ft (1.5m) at the shoulder – or less – in adulthood, and are particularly nimble, scrambling over rocks at great speed. (Conventionally-sized adult Asian elephants on the Indian sub-continent start at around 7ft at the shoulder and up.)

A full write-up of my kallana reconnaissance will appear in my forthcoming book, Pgymy Elephants, to be published by CFZ Press later this year. Meanwhile, I will have to be a bit vague, and refrain from publishing some of my photos, as I’m in talks with BBC Wildlife Magazine about a possible travel piece for their August issue, and they want first dibs on pictures and the story.

My talk on kallana is also part of the programme for the Centre for Fortean Zoology’s Weird Weekend 2011 in Woolfardishworthy, Devon on 19-21 August. I’m provisionally booked for Saturday 20th.

No, I didn’t find any pygmy elephants, nor did I see any conventionally-sized wild elephants. I didn’t expect to see any kallana. I did interview art teacher and multiple award-winning amateur photographer Sali Palode and his “tribal” guide Mallan Kani, of the forest-dwelling Kani people. They have been tracking “kallana” for over a decade, and have had three sightings in that time. They were able to photograph kallana on two of these occasions, in 2005 and 2010. (Sali speaks Mallayalam only, and his agent Balan Madhavan interpreted for me. I hope to have an extract of the interview linked to this blog shortly.)

Sali and Mallan also took me into the Neyyar-Peppara Sanctuary to show me the places where they encountered kallana. It’s thick forest with steep, single-file paths up and down the hills. The paths are elephant tracks, as evidenced by the dung piles with mushrooms growing out of them. The places where Sali and Mallan made their sightings were all on the edge of a small lake at the edge of the forest. 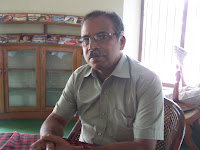 We did have a close encounter with a herd of about 20 gaur (wild forest bison) that Mallan found for us. Mallan’s forestry skills are impressive – he suddenly said, “Gaur! Guar!” although Sali and I saw and heard nothing, and he then disappeared into the forest. Ten minutes later a herd of gaur came stampeding straight at us. Some say that “kallana” are just young elephants playing a short distance from a herd that’s unseen and close by, but if the herd was close by, Mallan would know about it. I had the rare privilege of coconuts for lunch in one of the Kani hamlets in the forest after our trip. Access to “tribal” areas is normally restricted, we had cleared it with Sharma, the Trivandrum Division Chief Wildlife Warden, who knows Sali well. 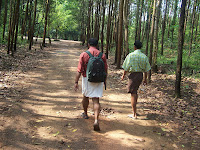 Sali and Mallan enter the forest 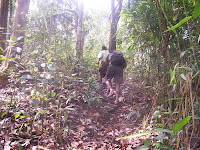 I am currently negotiating with Sali’s agent to purchase licenses to use a couple of Sali’s photographs, including one never published of a dead female he found by the lake in 2005. The local wildlife warden certified it as dead, stating it was a young elephant, and it was quickly cremated in line with Forest Department practice. Regional newspaper reports at the time saying a DNA sample had first been taken were incorrect.

I also had a chance to see some young captive elephants having a bath at Kodonad Elephant Camp, and it was good to get up close to them, and to compare young conventionally-sized elephants with the photos of “kallana.” 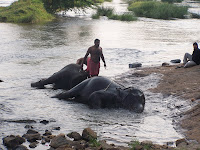 Up close and personal with young (conventionally-sized) captive elephants at Kodonad, on the Periyar River

I also interviewed two elephant experts. Prof Sukumar Raman is the expert on Asian elephants for the whole world, and I flew to Bangalore to talk to him on the huge Indian Institute of Science campus. I met and interviewed Prof Joseph Cheeran, a vet and an expert on captive elephants, in the Keralan city of Thrissur.

I have to say my initial conclusion is I am more sceptical about kallana then when I first arrived in Kerala. Prof Sukumar and Prof Cheeran said that many of the unique characteristics Sali says distinguish kallana from conventionally-sized Asian elephants are perfectly consistent with young Asian elephants, and there is a big range of size, tusk development and behaviour in young Asian elephants. All the kallana sightings were in the dry season – Kerala misses out on one of the monsoons and has a longer dry season – giving the elephants an emaciated appearance, which could be what Sali and Mallan were seeing.

It turns out that kallana doesn’t go back all that far in time either. Sali said Mallan first drew his attention to kallana “twenty-five years ago” on the summit of Agasthya Mala, south Kerala’s tallest peak, when he saw piles of smaller-sized dung. Prof Sukumar pointed out that younger elephants produce smaller balls of dung. Sukumar is also from South India, and said that “twenty-five years ago” in South India doesn’t necessarily mean 1986, but “a very long time ago,” so long that you can’t remember.

Sukumar also told me that the stories of kallana first arrived in Kerala around the same time, with reports coming over the border with the neighbouring state of Tamil Nadu to the East. I wasn’t able to communicate directly beyond single English nouns with Sali and Mallan on our trip into Neyyar-Peppara, as we didn’t really have a language in common, but it’s no longer clear to me whether kallana is an ancient tradition of the Kani, or a secondhand report acquired via local media by the Kani and others in recent times from Tamil Nadu. There are some Kani settlements (and a lot of other forest-dwelling “tribal” settlements) in Tamil Nadu, but the Kani in Kerala seem to be isolated from and unaware of the Kani in Tamil Nadu, who speak a different language. More study of the transmission of kallana reports is needed.

Sukumar was more open to the idea of kallana, and said that, as a scientist, “I wouldn’t rule it out.” He suggested that kallana is an example of “phenotypic plasticity”, variations within any given population, and felt the most likely explanation is that there’s a family group of slightly smaller than usual individuals in the sanctuary. Sukumar pointed out that being smaller would be a good adaptation in negotiating the thick forest slopes of Neyyar-Peppara. Sukumar has studied the elephants of Burma, that also live in thick forests, and they are smaller than Indian elephants, but definitely the same species. While Balan Madhavan, Sali’s agent, was emphasising to him the need to gather dung, hair and other discarded bits of kallana for DNA analysis, Sukumar said not to bother, as any variations unique to the alleged “kallana” family of smaller elephants probably wouldn’t show up in the DNA, as they’re well within the range of what you’d expect in conventional-sized elephants. Sukumar’s team planned to join in the Kerala Forest Department’s elephant survey of Neyyar-Peppara, looking for evidence of kallana, a couple of years ago, but it was rained off by unexpectedly early and heavy rains. He hopes to do it again sometime, considerable academic commitments permitting. 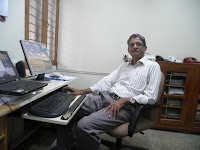 Prof Sukumar Raman in his office at the Centre for Ecological Sciences, at the Bangalore campus of the Indian Institute of Science

Sali also claims to have seen a mystery tree crab in the Neyyar-Peppara reserve, living in gaps in trees that are not particularly anywhere near water. There’s a photo of a tree crab on his website, erroneously filed on the “insects” page. (I’ve yet to get in contact with the naturalist who runs Sali’s website.) Sali drew me a sketch of the tree crab, which looked very different, more like a spider. He also said he’d seen exotic tarantulas in the sanctuary, although it’s not clear whether he was saying they were unknown species. I hope to delve more deeply into the Neyyar-Peppara tree crab mystery.

Balan Madhavan, who’s a well-known wildlife photographer, said he hoped to get a photo of another Keralan cryptid, pogeyan, the grey clouded leopard. He’s spoken to foresters who’ve seen it, and is convinced it’s for real. Pogeyan’s alleged range is in the far north of Kerala, in the tea plantations of Malabar.

In Kerala’s capital, Trivandrum, I encountered several carvings and statues of what were described as “unicorns” or “elephant dragons” – horse-bodied, eagle-clawed beasts with elephant’s heads. Some grasped their trunks in their talons, some had trunks reaching down towards considerably smaller “baby elephants” whose trunks reached up to theirs. Some had small crests or tufts on their heads. Some had multiple tusks growing out of thes sides of their mouth where their teeth should be, like the mouth parts of a monster prawn. They had a Chinese or even Indonesian look to them, and the elephant bits were anatomically very accurate.

Makara ("elephant dragon") at the Maharaja of Travancore's palace, Trivandrum

Sukumar told me these are makara, and they’re not exclusive to India. They seem to be an architectural flourish or heraldic beast, at a time when Travancore (South Kerala and bits of Tamil Nadu) were establishing diplomatic relations with European powers. I don’t know how the existence of makara – a mythical elephant dragon often associated with a small elephant – fits in with the tradition of kallana. Sukumar says there’s been little by way of research into the origins of makara. I invite any art historians who don’t mind getting up really early to make calls to India to investigate further.
Posted by Matt Salusbury at 14:12

It's nice to hear from you. Great blog post.
Himachal Tourism

Thank you for sharing this informative post with us. We are very thank you.