How to hold on to your lifeline 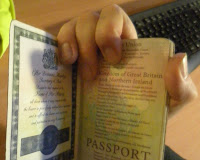 It has long been common practice in some Middle Eastern countries for employers to retain the passports of expatriate teachers. Back in the days when falling out with your boss or being refused a holiday were the worst things that could happen, EFL teachers put up with it.

In the last six months, however, a wave of protests has swept across the Middle East. Expat EFL teachers left Tunisia, Egypt and Libya in droves, though they're now mostly back in Egypt. One British Tefler escaped from Tripoli courtesy of a lift from the South African armed forces, while another hitched a ride with Portuguese diplomats.

Both these teachers - and those who boarded Royal Air Force cargo planes and a Royal Navy warship - only got on board because they had proof of their nationality to hand. Estimates vary for the number of migrant workers stranded in Libya without passports – mostly African, Bengali or Egyptian. There could be almost a million. Meanwhile the US State Department and the British Foreign Office have instructed all nationals to leave both Yemen and Bahrain. Suddenly we’re in an unpredictable Middle East where your passport being locked in the office for 'safekeeping' is very bad news.

The UK and US advise talking employers out of keeping passports if at all possible. The UK says that if you can’t avoid handing in your passport you should make a full, colour copy before you do so and keep it somewhere safe. It’s enough to get you onto a Royal Navy helicopter.

Teachers should also register with their embassies. Canada recently said that because so few of their nationals in the Japan earthquake zone had done so they had no idea how many were there.

Under the laws of most Middle Eastern countries, it is illegal for bosses to retain passports. When expat workers go to court in the Gulf states to get their passports returned, they usually win. Teachers who want their passports back can also say that the UN's International Labour Organisation (ILO) has declared retaining passports 'forced labour', a form of slavery. Even Saudi Arabia has adopted the ILO conventions.

Saudi employers will briefly need to hold on to the passports of expats to obtain an iqbal (alien registration card and residency permit) for them, but beyond that there is no reason to retain them. Visas that allow expats in Saudi to go on holiday are complicated, though recent reports suggest that getting a temporary exit and re-entry visa is becoming much easier, with payment and paperwork available via an ATM.

The retention of passports continues to be quite common in Saudi Arabia and has in the past led to teachers being put at risk. Back in the Gulf War of 1991 BAE Systems (British Aerospace at the time) retained teachers' passports after classifying them as 'essential personnel'. Many chose to break their contracts rather than live under threat from Iraqi missiles, while reports suggested some were redeployed to undertake 'security duties'.

Saudi courts seem to take a dim view of employers retaining passports. To everybody's surprise, an Indian oil worker who was recently denied his passport by his boss went to the Saudi courts and won. Arab News reported that in January the Jubail and Damman courts ordered the return of the unnamed expatriate’s documents, along with his family's passports, stamped with (eventually) the correct exit visas.

Passport retention seems to be a problem in Kuwait. The US State Department website says, 'There are cases where employers retain passports of foreign nationals resident in Kuwait. You should try to avoid this where possible, but you should always keep a copy of your passport.'

In Oman, employers 'often ask that expatriate employees deposit their passports with the company as a condition of employment - this practice is contrary to Omani law', according to the State Department. While a 2006 Omani Ministry of Manpower circular upholds the employee’s right to retain their passport, it doesn't stipulate penalties for employers, making enforcement difficult. The UK Foreign Office reminds its nationals in Oman that they need their passport (or a copy) at all times to show as ID.

In Qatar a 2009 law forbids bosses from retaining passports 'except for visa and immigration processing'. Labour laws are likely to be tightened due to the international attention focused on the country as its vast expatriate workforce prepares for the football World Cup 2020.

In the UAE it's also against the law for an employer to keep passports. Only a 'competent judge' can do so. This has been upheld by a 2008 Ministry of Labour ruling that companies retaining passports 'will not be tolerated'. A 2002 law imposes fines of 20,000 dhirams (£3,300) or three months' prison for employers who do so. A bigger risk than revolution in the UAE (in the boom-bust Emirate of Dubai, specifically) is your employer suddenly going out of business with your passport still locked in the safe.

Teachers on work visas will need some form of exit visa to get on the plane out of Saudi (a 'letter of no objection' releasing you from employment), Qatar and 'in certain situations' Yemen. But when revolution starts and your country's (or another country’s) armed forces arrive to evacuate you, they couldn't care less about any exit visa, they just want to see your passport in your hand, or at least a copy of it.
http://www.blogger.com/img/blank.gif

Update: Since the article appeared, the British consulate in Jeddah (Saudi Arabia) has started issuing 'Emergency Travel Documents' for its nationals who need such documents in order to return to the UK. Reading between the lines, this could be as a result of passports not being released by employers.

I have also recently come across an unconfirmed story of a teacher in an international school 'held hostage' in Qatar. The lack of an exit visa was allegely involved.

This feature was inspired by a source (a teacher who I won't name) who contacted the Gazette about passport retention issues with their employer in Saudi. As they haven't got back to us, we assume it's been sorted and they have their passport. They reported to us that a group of female Egyptian colleagues who went to the manager's office to demand their passports. They got them.
Posted by Matt Salusbury at 02:56

The practice of retaining passports is still very active in Saudi Arabia. I am in a situation that I have accepted a teaching position back in South Africa. I tendered my three months' notice and have now been told that I need to tender six months' notice before I can leave. during the three month period, I wrote at least 8 letters, one requesting an interview, all of which have been ignored. Messages were passed through supervisors.

The practice of retaining passports is still very active in Saudi Arabia. I am in a situation that I have accepted a teaching position back in South Africa. I tendered my three months' notice and have now been told that I need to tender six months' notice before I can leave. during the three month period, I wrote at least 8 letters, one requesting an interview, all of which have been ignored. Messages were passed through supervisors.