This first appeared in Fortean Times

Evolution of Island Mammals: Adaptation and Extinction of Placental Mammals on Islands

Here's a challenge. Can an enthusiast with only a biology 'O' level deal with a book pitched at zoology or paleontology postgraduates? There comes a point in pursuing fortean interests where you may have to confront literature so technical it leaves you behind. So I approached Evolution of Island Mammals warily, but found it surprisingly easy going. I only had to look up 'parietal' (bits on the side of your skull), while I called in my sister - an osteopath - to explain what "synostotic fusion" is.

That aside, there's a lot of material in here that’s fascinating to the non-specialist. Much of the research is new, or a new assessment of existing material, the result of admirably painstaking work by the Dutch-Greek authorial team who travelled the world’s obscure museum collections measuring and comparing old bones and teeth.

There's a few laughs in here too. Intrepid British lady naturalist Dorothea Bate arrived in Cyprus at the turn of the twentieth century and revealed that the miraculously preserved relics of the "300 marionites," the legendary founding fathers of Cypriot Christianity on display in churches, were in fact the fossilized bones of pygmy hippos. That discovery can’t have been well received locally.

Some of the larger mainland mammals – especially the good swimmers like hippos, elephants and deer – evolved quite quickly into cute miniature island versions. The smallest of the pygmy elephants, at just under a meter high, was proto-Sicily’s Elephas falconeri, the biggest mammal on an island it shared with mice, rabbits and not much else. The authors consider the controversial pygmy human "hobbits" of the Indonesian island of Flores, Homo floresiensis to be a distinct species. A volcanic eruption 17,000 years ago apparently finished off the "hobbits" and Stegadon sondaari, a dwarf relative of the elephants, and may have killed off the island's giants cave rats too.

Island Mammals concludes most of these island dwarf mammals died out before humans arrived, although Majorca’s early humans may have domesticated the 50cm-high Myotragus balaericus, the “mouse goat”.

The same evolutionary forces that produced cute miniature versions of mainland mega-fauna also drove the evolution of scary giant versions of normally cute fluffy little mainland mammals. The Cretan deer Candiacervus major, at 1.65 m at the shoulder, was slightly larger than the Irish elk. Malta has Leithia, a double-sized dormouse, preyed on by outsize owls. Madagascar once had knuckle-dragging ground lemurs, and Sardinia had Megalenydris barbaricia, a flat-tailed otter that was “truly a giant… much larger than that of a living otter”, although its remains are too fragmentary to tell just how much bigger. What really kept me awake at night was the thought of Diogaronyx, the terrier-sized “monster hedgehog” from a Miocene archipelago that’s now part of Italy.

While the scholarship of Island Mammals’ research is excellent, its presentation and structure is more “postgraduate.” This – and the price tag – make it more a work of reference than bedside reading for forteans to dip into for a pleasant read. The illustrations are mostly black and white, with small colour plates confined to the middle. This is a pity, as the authors have shown they can write a more coffee-table type book on this subject – Island Mammals evolved (excuse the pun) out of the Dutch-language Hoe Dieren op Eilanden Evoluren, a sumptuously-illustrated 2009 Darwin anniversary celebratory work aimed at the general reader. Surely this subject is broad and engaging enough to deserve an English-language work for us non-specialists. 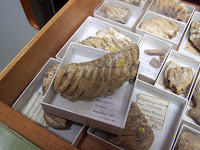 Dwarf Cypriot elephants' teeth from the Bate Collection at the Natural History Museum London. They feature in Evolution of Island Mammals. Photo: Matt Salusbury
Posted by Matt Salusbury at 07:15