I went to Counter Terror Expo in Olympia in May assuming I’d find all sorts of dodgy goings-on involving the transformation of the policing of legitimate protest into some ludicrously over the top ‘counter-terror’ operation, or something, with an industry to match. (The company that runs Counter Terror Expo, Clarion, also does this year’s DSEi arms fair, hence the protesters outside Counter Terror.) But when I got into Counter Terror to take a look, the event’s title seemed a bit of a con.

I had to look quite hard to find in the exhibition for an example of ‘counter-terror’ tech that could be readily abused to crush civil liberties. I can report that it’s a very bad idea indeed to take your smart 3G phone on a demo. Half your life is on it.

“Mobile phone forensics “ is definitely one to be wary of. If Counter Terror is anything to go by, mobile phone forensics is absolutely huge. There are handheld readers that can get everything off your mobile in a second, or possibly even suck in details if it’s nearby through some Bluetooth-type system. Then there’s the software to store and analyse all the data on your mobile, and don’t forget they can now easily cross-reference it with all the other data they got.

And if you ever doubted the ability of the state to find you using your mobile phone as a beacon, Winkelmann sell detectors of ‘electronic devices.’ They’re designed for finding the triggers to IEDs, but their policing and civil liberties implications are obvious.

I heard secondhand reports that the two black blocs on the March 26 demo had left their smartphones at home and taken their old phones from a few years back, that were essentially just phones with text, and the minimum amount of phone contacts stored on them.

Micro Systemation (MSAB) “the leader in mobile device forensics” was flogging its XRY system - software for data recovery for law enforcement, with the expensive support team as well, of course. And training. The not very clear photo on their literature suggests the kit can read credit cards too, and comes with a briefcase full of different phone adaptors.

Then there’s a whole infant industry of “Voice Biometrics” or “voice-based identification.” As described by its cheerleaders at the Speech Technology Centre, this is “a branch of forensic science called ‘audio forensics is being propagated to process such audio evidences.” Its “based on the theory that voice of each person is as unique as fingerprints or DNA.” So the science behind it is still dodgy, and it’s not legally admissible as evidence in UK courts yet, but no doubt lobbyists are on the case ensuring it will be. Expensive training in voice biometrics is on offer, along with exorbitantly-priced voice database management system.

Although the voice biometrics publicity emphasises “suspects,” there are obvious links to mobile forensics, such as voice messages found on a mobile, etc. No doubt it won’t be long before someone is taking your data off your mobile, copying your voice messages, and doing voice identification on them, and build up databases of voice.

The voice biometrics brochure was pushing an infrastructure of regional and national voice databases , with three human operators each in the regional databases, using software that can handle 10 million operations a day. On the diagram, the “Voice IDs” linked to other stuff like photos. The diagram suggests a lot of voice data will come from mobiles. 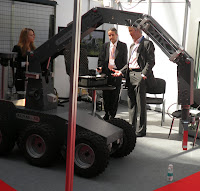 Other than some scary stuff at the mobile phone end of the spectrum, Counter Terror turned out to be a bit of a mixed bag of corporate counter-espionage, mercenaries, protecting businesses from organised crime, Torture Garden fetish uniforms complete with gas masks, contemporary Japan panic nuclear biological chemical disaster, and really dreary stuff about the integrity of seals on containers coming to airports. Even demonstrations of unbreakable cases being run over by Land Rovers, and a simulated ‘IED’ area, couldn’t disguise the fact that this was an essentially dull event for people flogging security stuff, who’d gathered under the ‘counter-terror’ title in an attempt to look impossibly sexy and glamorous.

It seems the ‘corporates’ and law enforcement have no faith anymore in the vast infrastructure of CCTV that’s grown up. Many exhibitors sell packages that let you set up your own on-the-spot CCTV network instead for whatever occasion it is. There was one stall-holder selling CCTV systems to schools. Terrorism it ain’t, but selling it at a fair called Counter Terror makes it sound way cooler than it is.

CCTV Image magazine for winter 2011 was being given out. In it, a article says the mythical ‘300’ a day number of time you’re captured on CCTV is more like between 42 and 101 with a mean average of 68, based on known cameras in Cheshire and real journeys people took. (According to a Cheshire Constabulary survey.)

There were items for conventional policing on sale – batons, the people who do the warrant cards and police insignia and so on, but there wasn’t even the pretence that it had anything to do with terrorism. It just sounds more glam than policing and boring security and intelligence-gathering. There’s also the intriguing Metropolitan Life, a rather rubbish magazine for and by London coppers. It had a regular Indian cookery column by ex-cop Rayeesa Asghar-Sandys who now runs a cookery school in Herts. More interestingly, who’s advertising on the back? Divorce lawyers. Russell Jones & Walker have a specialist “Family team” called Divorce 4 Police offering a first appointment free, and 35 per cent off for Police Federation members.

Much of the floor space was devoted to the deeply dull but comparatively very big industry in reinforced fences and bollards. The only slightly exciting variation on the vast number of these was a ‘hostile vehicle protection system’ disguised as a strategically-placed large planter for ornamental shrubs or bench in your corporate forecourt. Someone seems to have convinced everyone that people want to ram trucks into their building. The ‘hostile protection vehicle system’ under its ordinary street furniture disguise has steel pillars going several feet into the ground, and is guaranteed to prang any mythical jihadi truck bombers who’ve taken a strong dislike to your corporation.

In the world of boring corporate security, PAS68planters.co.uk frighten their customers with the thought that “unwelcome visitors try to smash their way into your building with a truck”. They prevent them with “highly effective vehicle barriers” discreetly disguised as a plant pot. Competitor company Marshalls Street Furniture have reinforced planters, bollards and benches that continue underground and also stop speeding trucks in the obligatory dramatic crash test photos.

The sexiest item on display was the BCB International "The Buccaneer” a compressed air cannon that hurled ‘golf balls, nets or whatever you want” at pirates. Steel nets caught up in the propellers will take them out. They deliberately don’t provide ammo. The fact that it’s “not pyrotechnics” means you can bring it into any port no bother. The salesman said golf balls will hole a small launch. ‘Non-lethal’ improvised projectiles could include ice cubes or paintball pellets. They also do self-inflating body armour.

This is more anti-piracy on the high seas (the Red Sea in particular) than anti-terror, but the applications for use by Japanese whalers against Greenpeace are obvious.

Back on the boring end of the spectrum, there’s bespoke insurance for places like Libya and the new buzzword is ‘extraction’ – mercenaries to get your expatriate corporate workforce out of this weeks’ Middle Eastern dictatorship that was regarded as the most stable country in the world until last Tuesday.

Your worst paranoia about faceless militarized robo-cops is true after all!

Some of the wares on display were not so much counter-terror but counter espionage. Some were selling kit for encrypted voice calls on smart phones (Cellcrypt). And never mind the tinfoil hat brigade, corporates were being sold a tinfoil communications tent into which you could disappear safe in the knowledge that no one could get at the data held on those leaky electronic devices.

I didn't have time for any of the Counter Terror talks, but what did strike me from reading their brochures was the
frightening number of academics whoring themselves to the security industry.

Another revelation for me is that the ‘security experts’ of the world all agree that Cameron’s policy of cuts, cuts, cuts is wrong, wrong, wrong. Another freebie being handed out was the Intersec fear and security industry magazine. Its take on the Greek riots identified austerity, specifically youth unemployment, and people taking it out on a young immigrant workforce, as the key security problems in the Eurozone. Spain, they said, with a much bigger youth unemployment rate, had handled the crisis well with job creation programmes.

British security services according to magazine’s article ‘Spreading Disorder’ say Britain is four meals away from anarchy. The EU has to address youth unemployment or “immigrant-related racism” and rioting will spread. The professional cynics of the security industry agree that massive cuts are the worst thing you can do in these circumstances. They also say there’s not much else you can do in response to a security crisis, apart from buying in more of that boring perimeter security (fences and razor-wire) to go around your ministry buildings in response to Europe’s “new wave of anti-government protests”.

Maddest of all was the International Association of Bomb Technicians and Investigators, who have as their logo a cartoon bomb-throwing anarchist.