Terry Nation - the man who invented the Daleks - book review 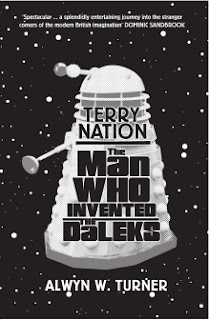 Terry Nation once quipped that while many claimed the Daleks had really been their idea, no one pretended they were the real author of The Keys to Marinus, Nation's unmemorable early non-Dalek Doctor Who story. That didn't stop Nation recycling numerous ideas from Marinus into his later Blake's Seven sci-fi series, and repeating them in his Dalek stories. Nation's 1970s post-apocalypse drama The Survivors had the same title as the first draft of his first Dalek script. A Who producer once reminded Nation to "avoid any resemblance to your previous shows, i.e. a group of fugitives hunted through the jungle by Daleks." As Alwyn. W. Turner brings to our attention in this biography of Dalek scriptwriter Terry Nation, many of Nation's Who and Blake's Seven plot devices were just recyclings of H G Wells.

Although remembered as one of TV's greatest sci-fi writers, Nation was a failed comic – he was once advised, "the jokes are good, it's you who's not funny." He penned gags for a scriptwriting agency set up by Spike Milligan, Eric Skyes and Steptoe writer Ray Galton, and came to comedy just as comedians began to admit beginning to admit their jokes were not all their own work. Nation wrote for comic genius Tony Hancock's last ill-fated TV series and theatre tour. The ever-affable Nation somehow managed to keep working with the increasingly volatile and drunk Hancock – Nation said he was paid £100 a week in 1950s money "basically for babysitting" Hancock, his duties included covering up the unfortunate incident involving a naked Hancock in a train compartment.

Plentiful work for Hancock caused Nation to turned down the first Who script he was offered. The inevitable Hancockian falling-out followed. But that new children's sci-fi drama was still on the table, so Nation began writing what became the first Dalek series as a Saturday job, devising gags for an Eric Sykes-hosted revue being his day job. Tony Hancock's younger brother Richard became Nation's formidable agent – the BBC knew every Jim'll Fix It Dalek walk-on meant an invoice in the post next morning.

Fan folklore about why there's so little Dalek in the 1990s Doctor Who TV movie, and fan legends about planned Who/Blake's Seven crossovers, are demythologised here. I was particularly interested in the small print on Nation's now-legendary 1963 contract reserving for him the Copyright of the Daleks. Turner says this was the result of BBC failure to grasp the then new concept of "merchandising," or the implications of Beryl Vertue, secretary at Nation's agents (later a TV producer) crossing out what she told them was an unnecessary contractual clause on merchandising.

Saturday job though it may have originally been, Dalek merchandising earned Nation immense wealth, although Turner agrees the rumoured seven-figure sum he earned from 1960s Dalekmania was exaggerated. Nation toasted with champagne a deal reached with the Pertwee-era Who producers regarding first refusal on Dalek scripts and the commissioning of what became Planet of the Daleks. It dawned on the visiting Who team that this wasn't a special celebratory tipple, Nation made so much money from Dalek spin-offs that he routinely drank the stuff. After moving to Los Angeles in the 1980s, Nation tried unsuccessfully to get various shows and films realised. Apart from some script doctoring on McGyver he did little paid work. He didn't need to – he and his family still lived comfortably off the Daleks.

The Man Who Invented details just how much effort and money Nation spent on trying to get a The Daleks TV series commissioned in the States, and how much of a blow it was to him when he ultimately failed. At one point, a studio had been booked and set construction was about to start for The Daleks when the plug was pulled.

Old socialist Cardiff boy Nation attributed his Stakhanovite script output to "my Welsh guilt." He certainly showed the same work ethic when soaking up cultural influences as a child – he bunked off school for a whole term and went to the pictures every afternoon before he was rumbled. The adult Nation churned out scripts at phenomenal speed, exasperated script editors observing that his first draft was often his last. He was said to have run off a Blake's Seven episode in five days. While he was frequently slapdash, Nation was happy to accept changes when editors pointed out that there were three uses of the sprained ankle plot device in a single episode of Blake's Seven, or several different ticking bombs in a single helping of Who.

Although the narrative of Nation's sci-fi oeuvre is engaging, the book's episode guides to forgettable adventure series that Nation worked on – The Saint, The Persuaders! The Champions, The Baron – is hard going. The problem with such a biography is that few readers are fans of 1950s radio comedy, the above-mentioned not very good adventure shows and Nation's sci-fi output.

Cryptozoologists may care to investigate What a Whopper, the Swinging (very early) Sixties Nation-scripted comedy starring most of the Carry On team and pop star Adam Faith. It's sort of like Alien Autopsy but with the Loch Ness monster.

My feature on Curse of the Daleks, the long-forgotten (probably deservedly) Daleks children's matinee play co-written by Terry Nation, from the height of Dalekmania in 1965

My profile of Kit Pedler, creator of the Cybermen for Doctor Who (also from Fortean Times)