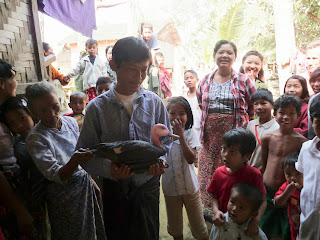 This article first appeared in Fortean Times FT 302. Following a letter to Fortean Times from Paolo Viscardi, I have corrected a conflation of two different stuffed mermaids that appeared in the original article, this passage is indicated in bold type.

It was a full house in the basement at Treadwell's "esoteric beliefs" bookshop in Bloomsbury for There Be Beasts, the first London Cryptozoology Club (LCC) mini-conference in April. Treadwell's had helped out at the eleventh hour after the original venue fell through. James Newton, founder of the LCC and one of the conference's organisers introduced the day's proceedings before allowing

Richard Freeman, zoological director of the Centre for Fortean Zoology, to kick off, resplendent in a waistcoat emblazoned with gold dragons. His pet hate is Hollywood's tendency to depict dragons as having only two legs, when they should have four. The two-legged versions aren't dragons, they're wyverns, says Richard. "People who put wyverns in films and pass them off as dragons" drive "cryptozoological pedants like me" into a murderous rage.

He reeled off a list of mystery animals, a list that until 1904 would have included the gorilla, then regarded as just "a hairy ogre from 'native' folklore." Richard feels that Gigantopithecus – a huge fossil Asian ape whose fragmentary remains suggest it walked upright – is a good candidate for the identity of a current cryptid, the yeti. 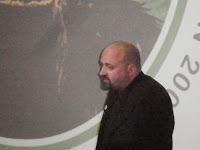 While earlier researchers perceived Bigfoot – North America's manimal – as an ape akin to Gigantopitchecus, "armchair cryptozoologist" James Newton introduced us to current trends in Bigfoot research, which suggest we're dealing with something much closer to us humans. James worked as a volunteer at South Dakota's Cheyenne River Youth Project with the Cheyenne River Sioux Tribe, a division of the Lakota Nation. Over twenty years of experience in youth work means he's good as spotting when children are trying to pull his leg, but he was struck by how Lakota kids he worked with described their attitudes and encounters with Bigfoot in a matter-of-fact way. Like the time in 2006 when, out of the blue, a girl named Misti Bad Warrior pointed to an illustration of Chewbacca in a Where's Wally? book and said, "That's Bigfoot." 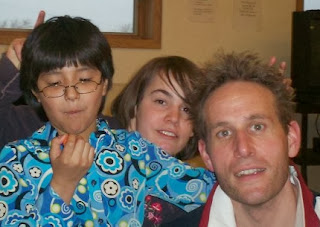 Self-described "armchair cryptozoologist" James Newton, pictured when he was a youth worker with the Cheyenne River Sioux Tribe division of the Lakota Nation in South Dakota. Photo by kind permission of James Newton

Recent takes on Bigfoot, by the likes of researchers Autumn Williams – herself a childhood Bigfoot witness – and the "Tennessee Bigfoot lady" Mary Green, describe "habituation scenarios" – years of interactions between rural families and Bigfoot communities. The witnesses "were people who lack the sophistication to make it in cities… but were tuned in to their environment". Encounters could take the form of gift exchanges – missing animal feed, "artwork" gifts like knotted stalks of grass left in return, or a mother looking out of the kitchen window to see their child handing some biscuits over the fence to their "big hairy friend".

Suburban south London's Horniman Museum has in its collection a specimen known as "Japanese Monkey-Fish; Merman (Ningyo)." The Horniman's natural history curator, Paolo Viscardi,took us through an "unnatural history of mermaids."

It seems that in nineteenth century Japan, small representations of nature spirits were made – from a monkey and a fish – for shrines. When the first Western sailors turned up at Nagasaki, Japan's only trading port, a of monkey-fish mermaid cottage industry grew in response to demand.

Everyone assumed the Horniman mermaid, and all other mermaid "gaffes", were made from the head, arms and torso of a monkey sewn on to the back end of a fish. It transpired the Horniman "monkey fish", while it probably the back end of a carp, has no monkey parts at all. It has wire for fingers, a clay and papier-mâché head, fish jaws, bamboo neck, arms of wood and wire. Under X-rays or put through medical scanners, most "monkey-fish" mermaids display an absence of actual monkey bits. Leiden's small mermaid known as the Blomhoff Specimen can be traced to one of the nineteenth century trade fairs that took place around Nagasaki, but an extant mermaid specimen from India seems to be the only known still extant example of a mermaid that actually contains monkey body parts.

Richard Thorns, the "pink-headed duck guy" has been on three trips to Burma in search of that elusive bird – a large, mallard-sized diving duck with a long, ramrod-straight neck, chocolate brown in colour with a "bubble-gum pink" head (a gentler pink in the females). The duck was shy and solitary, preferring deep pools in wetlands. We're unsure if it was a species of pochard or a genus all of its own. It was always a rare bird, regarded from the early days of the British Raj as "a good day's bag." A 1920s captive breeding programme in Surrey failed, and the last recorded pink-headed duck (P-HD) was seen in 1935, in the north Indian state of Bihar. The wetland habitats around India's mega-cities have gone the same way as the pink-headed duck, but numerous marshes resembling those "vanished ecosystems" still exist over the border in Burma. "How could you possibly not want to go after that?" asked Richard.

His first Burma trip took Richard to Kachin State, three days upriver from Mandalay. You "can only stay at approved hotels" in Burma, so he had to use the services of a clandestine guide who had to hurry home when news came that "Immigration" were questioning his wife. In Richard's video interviews with locals, the camera's often pointed to the ground. People apparently didn't want to be photographed. Eventually, witnesses reported two P-HD sightings at one lake, and Richard heard about an unconfirmed sighting – lasting only a few seconds – by a Dutchman atop a hired elephant during a 2003 expedition to a lake at Naung Kwin. One fisherman said of the mystery duck, "it was here once." A broken hand from a motorbike accident cut short Richard's most recent expedition, while the Kachin Independence Army insurgency meant "unauthorised contact with foreigners" would land his guides in jail. He thinks one of the photographs he took just might show a P-HD on the lake. Time may be running out for the duck, if it does still live in Burma. Saffron and mustard cultivation are encroaching on the wetlands. Says Richard, "if Burma opens up, it would be very bad news for the pink-headed duck."

London Fortean Society coordinator Scott Wood described the legendary parakeets of London and friends. (The "friends" include the brand new Fordham Park panther – sighted by a woman in a street of that south London neighbourhood earlier that week.) Ring-necked parakeets are now endemic to a 30-kilometre stretch of West London (and Ramsgate), while South London is home to the Monk parakeet. Scott's fascinated by the urban legends and far-fetched "escape scenarios" surround the parakeets' arrival in the capital. These include Jimi Hendrix's two parakeets escaping from his Portobello Road flat at the moment of his death, fugitives from the Twickenham aviary of the exiled King Manuel the Unfortunate of Portugal, (still commemorated in Twickenham's Manuel Road,) break-outs during the filming of Anthony and Cleopatra and/or The African Queen at Shepperton Studios – except the later was filmed in Isleworth. Parakeet lore has turned the birds into a metaphor for immigration panic, a celebration of London's multiculturalism or a harbinger of global warming. The problem with these "scenarios" is that a DEFRA report says parakeets have been kept in English captivity since 1855, and are known to have been "naturalised" by 1960, before the demise of Hendrix.

James said of There Be Beasts that it "proved far more successful than we had imagined. We are hugely thankful to the speakers who gave their time and knowledge for free." There are plans afoot for "a bigger event in 2014" and for a summer LCC expedition to Dorset, in the company of "large cat" expert Jonathan McGowan, searching for traces of British Big Cats. 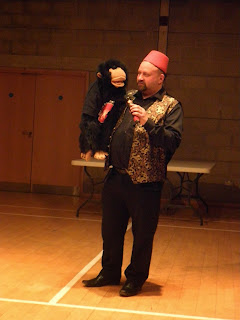 Since this article appeared in Fortean Times, I've spotted a parakeet in Clissold Park, Stoke Newington, London N17 - much further east than London parakeets have been reported before. And I've heard - but not yet seen - parakeets even further east, in London's Victoria Park.