Encounter with a Bengal cat 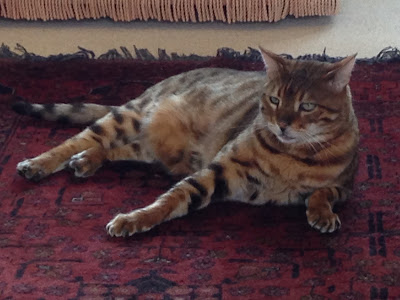 I've heard a lot about Bengal cats, and how Britain's big cats are supposed to be misidentified Bengal cats, how the genes of Bengal cats and other exotic breeds are supposed to have got into the feral cat population and turned them into something altogether different... and bigger. I heard that Bengal cats were real characters, they liked to go for walks on leads, and that they were such a handful behaviourally that they were often abandoned. I recall reading Big Cat Rescue saying that they used to get call-outs from people saying there was a "Florida panther" on the loose, attacking Alsatians and in some cases frightening old ladies, but when they got there it was often just an ever so slightly bigger than usual Bengal cat that had gone AWOL or been turned loose.

Legends tell of how the original Bengal cats, hybrids of the Asian leopard cat (Prionailurus bengalensis bengalensis) were named after one that was found in the Bay of Bengal on the approaches to Bombay (Mumbai) by early East India Company sailors, swimming out towards them. Like most exotic stories on the origins of exotic cat breeds, it's probably nonsense. (Burmese cats weren't originally from Burma, but from Thailand, "Bombay" cats were bred in Virginia, and so on.) We know they were deliberately crossbred. The UK Dangerous Wild Animals Act 1976 came in largely because Bengal cats (and wolf dogs, crosses between dogs and wolves) were turning up in the country, with the authorities unsure how they would turn out, the law banned wolfdogs (they're now legal) and required a license for Bengal cats that had more leopard cat genes than "F4" (fourth generation). Bengal cats are known for their "confident" temperament (a bit of an understatement!) Breeders sell them for anything up to £800 each.

I finally got to meet a Bengal cat face to face. He lives somewhere in the Blyth Valley in Suffolk, looked after by a fosterer. He came from a smaller house at the other end of the same village, but he obviously decided he didn't like his accommodation and fancied living in a bigger house and garden nearby, so he abandoned his humans and moved on in his new chosen home - fairly typical Bengal cat behaviour, I am told!

He is very vocal, quite friendly, and the two things that really struck me about him are that he is very muscular - at first glance he looks a little on the overweight side until you see that he is all muscle. Secondly, his fur is very short and shiny, it has a different feel to most cat fur. His back is also different to a mainstream domestic cats - a bit more arched. His toes seem a little longer too. The vestigal pad that most cats have towards the back of their paws is much more pronounced.

And check out his markings - quite unlike anything you'd see on a domestic cat - those leopard-like rosettes! 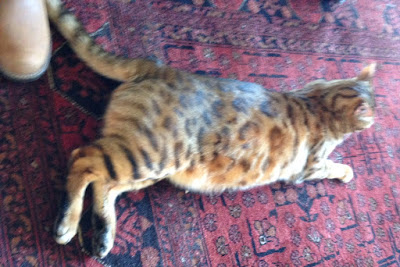 And impressive-looking cat indeed, but if I hadn't been told he was a Bengal I'd have difficulty distinguishing him from an ordinary domestic cat. As for his size - a large, muscular cat but not even as huge as some of the long-haired, captured black feral cats I've seen in the county. Suggesting that British big cats are misidentified Bengals is a bit of a stretch but for one characteristic I've noticed - we British are absolutely hopeless at identifying big cats.

There are also regular reports of an "Ocelot-like" big cat in Cambridgeshire. From a long way off, could this be a Bengal? And any possibly already huge feral cats out there would definitely start to seem more big cat-like a few generations after an injection of genes from those shiny, muscular, arch-backed Bengal cats.

I heard about Bengal tiger.
But, now I Knew about Bengal cat because of your post.
Interesting.
Keep posting.
Banquet halls in Habsiguda
Function halls in habsiguda

Very good information is given in this blog...Everyone likes to have pets, if you want to keep it,
then we are the best pet's shop and best breeders in Dehradun,Uttarakhand(India).


I'm having very interesting information regarding Sphynx Kittens for Adoption

Having a cat pee all over the house can drive you crazy.

It stinks and creates unnecessary work to clean up the mess.

But what can you do to fix it?

Well, it appears you’ve only got two options.

1. Lock your cat up in one room during the day
2. Or get rid of it completely

Well you don’t have to…

There’s now a solution that makes your cat ALWAYS pee in its litter box.

It’s called “Cat Spraying No More” and it’s been proven to work.

All you have to do is follow the step-by-step directions and you’re cat pee problems will vanish forever.

Plus, it comes with a 60-day money back guarantee, so there’s no risk.

Go check it out now…

Human and animal always have a good connection with each other. There are different pet animals in the world. But the Serval cat is very cute and favourite animal for many people. It is a stronger yet and slender animal with long legs and a fairy short tail. Its leg length is relatively one of the tallest cats. The head is small in relation to the body. Usually, the Serval is boldly spotted black on her body. It’s really looking beautiful. I have a Serval cat; I have bought it from The Purrfect Spot Cattery. Now the cat is like a family member for me.

This was vey enlightening perusing this blog. A particularly pleasant portrayal If you might want read more about these themes , view toyger cat

This was vey enlightening perusing this blog. A particularly pleasant portrayal If you might want read more about these themes , view tortoiseshell cat