An attempt to get a COVID-19 test

I ACCOMPANIED a friend who went to get a COVID-19 test in London, or tried to.

My friend was a teaching assistant in a school in Enfield, who was teaching children for vulnerable families who still attended school during the lockdown. Except most of them didn't, their parents didn't want them to go to school. He ended up spending most of his workdays on the phone to parents at home, and devising activities for the kids to do at home. A couple of months before, he'd lost his sense of smell, it was only gradually coming back. This being the most obvious symptom of COVID, I persuaded him to get himself checked out before a return to school, just so he was covered if anything happened, he could say, "I told you so."

We had often gone for lockdown bike rides together along the Regent Canal and the River Lea (keeping 2m apart), and on this occasion my friend announced he'd booked a slot for a COVID test, that was going to be in Lea Valley Park, in Edmonton, not far from the IKEA. The Lea Valley Park is just off the River Lea towpath, so he thought he'd check in for his test after a nice bike ride. I said I'd go too, and wait outside.

When we got there we found it was - surprise, surprise - a bit of a shambles. Firstly, it was DRIVE-IN only. That's right, in a city where at the last estimate, 30 per cent of households owned a car. Most of these 30 per cent of our vast city are in the suburbs, car ownership (or access to a car, via a car club) is much less in the inner city. This is also a city that has been actively discouraging car ownership and car use for at least the last 20 years. The staff (typically untrained and unprepared) blamed "the company" - another example of government outsourcing to private companies clearly not up to the job. Staff suggested my friend should ring a cab and get the cab to drive them the very short distance through the drive-in. Did they have any numbers for local cab companies? No.

My friend gave up, and went back to teach not knowing whether he had Covid or not. Properly briefed staff could have told him that an antibody test, rather than a test for whether he still had COVID, was coming soon and would be more appropriate anyway. 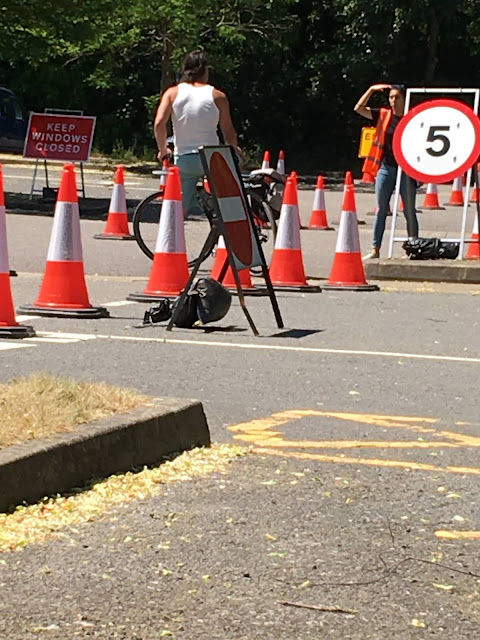 A man on his bike turns up at the coronavirus testing centre at Lea Valley Park, London. Note that the member of staff (in reflective vest) is not wearing a mask.