IT TURNS out I live five minutes away from Ockenden Road, home of Dominic Cummings, controversial special adviser to the Prime Minister. I knew he had to live somewhere in Islington, because early on in the controversy around his eye-test road trip to Durham, news footage of him showed a street that had those distinctive Georgian houses you get round here that scream "Islington."

I stumbled across Cummings's street by accident. Walking to the shops on Essex Road one day, I came across this graffiti scrawled across Tesco's. My first thought was, ah, this must be where Dominic Cummings lives. 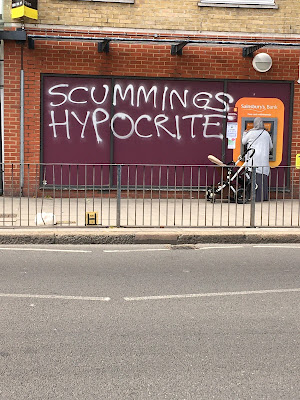 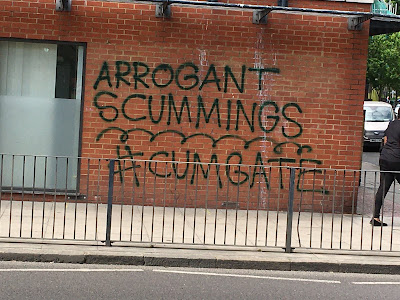 Sure enough, the right turn off Essex Road opposite the graffiti was Ockenden Road, and down the bottom of the street on the right was a house with outside it two of the most polite cops you could imagine. There was a car-load of photographers with their long lens cameras out on the street immediately outside. They were looking bored - it was early afternoon so no one was expecting Cummings for a while.

I came back in the evening in the forlorn hope I might catch a glimpse of Cummings and the circus around him. I wasn't actually that interested in Cummings himself, more in talking to my photographer colleagues to see how they were getting on. As Chair of NUJ London Freelance Branch I was aware that some of them had lost all their work, I wanted to find out from them as they stood around waiting what it like working during Covid for those who were still working.

There were a half dozen or so photographers around, talking to the very polite cops. They were from Camden nick, a police station whose beat is the boundary of Islington and Camden. They seemed quite media savvy, when I asked them whether there was Section 60 Public Order Act order in force in the street, they said they were "unaware" of any such order and directed me to the Met press website. They seemed used to checking Press Cards courteously. When their colleague strolled up to have a word with them, it was "Evening, gents!" to the press pack. (A colleague had heard a rumour that a Section 60 had been declared in Ockenden Road, which turned out to be baseless.)

There was a van full of Paddington Green cops that was parked round the corner in Southgate Road. (Ockenden Road is right on the edge of Canonbury, in the "bit of Islington that thinks it's Hackney" in the words of my Islingtonian brother.) A plainclothes cop with a rather obvious radio and a rather more obvious Met Police stab vest on appeared on the corner of Southgate Road. Later, a red Diplomatic Protection Squad van cruised very slowly around Ockenden Road and surrounding streets. It had tinted windows so I had no idea whether it was full of coppers or not. 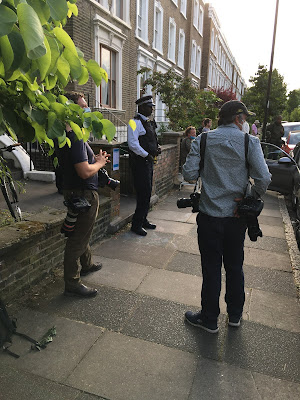 Photographers I was with on the Cummings stake-out were mostly from agencies such as Associated Press, or outlets such as Sky News website. One of them said that their sports writers had all been furloughed, while the sports photographers had been transferred to news photography. With nothing coming out of sports or the cultural and showbusiness beat, there was a need for more straight "news" to fill pages. Photographers were getting calls from their sports photographer colleagues at railway stations, asking what the deal was about byelaws on filming or photographing people at stations. They'd never done this sort of work before. Their regular news colleague were happy to help.

There were a few protesters waiting over the road, some of whom were clearly Cummings's neighbours. From WhatsApp traffic on my local Mutual Aid Group (MAG), it seems that some of the MAG activists live in Ockenden Road. When the Black Lives Matter thing started, people from the MAG were prominent in organising a "die-in" in Ockenden Road around the disproportionate numbers of BAME Covid-19 deaths

Cummings seemed to be working late at the office that night, I gave up waiting for him to show and went home at about 8.30. Not long after that, from my garden I heard a wail of police sirens coming up Essex Road, and heard a police helicopter overhead. I realised that these were sounds I'd heard every evening for the past few days.
Posted by Matt Salusbury at 11:14