May 09 Freelance - shame of G20 plod, Facebook thought we were stupid 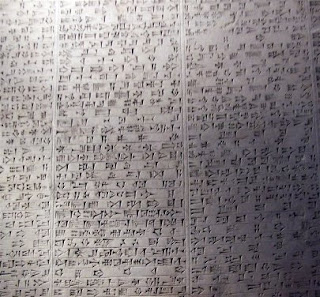 What's my photo of a Babylonian cunieform tablet doing here? Find out here.


Print media industry magazine Press Gazette suddenly announced it will cease publication after the May issue, going the way of much of the media it reported on, but the Freelance, for freelance journalists everywhere, is still going strong, and the May 2009 online edition is now out.


My articles in the May Freelance include:


Facebook thought we were stupid - another reason not to bother with Facebook. They changed the terms of use without notice to grab everyone's copyright, then they were forced to climb down.


Keeping ethics alive (book review). An inspiring new book on the ethics of journalism deserves a wider readership than the obscurity of an internal union pdf publication that it will probably languish in.
Posted by Matt Salusbury at 07:11