Appropriate Big Cat Investigator headgear, and finally face-to-face with Wool I Am

I stopped off in Ipswich today and purchased suitably appropriate Big Cat Investigator headgear (shown above). Although I may pin or stitch back the ears to make it more streamlined when I'm out and about. Stand by for an announcement shortly regarding me talking on Suffolk Big Cats on BBC Radio Suffolk. Watch the Mystery Animals of Suffolk Twitter thing for details.

The stall-holder in the seasonal street market near Ipswich's Town Hall who sold it me said, "I was told to drop my prices because it's Ipswich." There's a slogan waiting to be adopted by the Ipswich Chamber of Commerce there. He was all the way from Kent, and mentioned Big Cats down there, so I referred him to Neil Arnold, the go-to guy for Big Kats in Kent, and also for reports of giant phantom wolves near the Bluewater shopping centre. 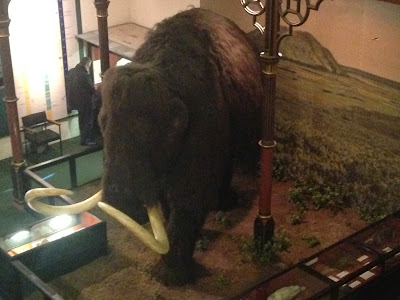 I was also finally able to visit Wool I Am, the recently-named full-sized Ipswich mammoth in the Ipswich Museum. I'm afraid I was moving around the museum at a quick march, as I had exactly 1 hour 10 minutes to change trains. The Museum's rhino in its Victorian Natural History gallery now has a replica horn to deter thieves.

Wool I Am would probably not have been around during the brief period between two British Ice Ages which is known as the Ipswichian Interglacial, after strata found around Ipswich.
Posted by Matt Salusbury at 09:42