A Roman carcal in Norfolk 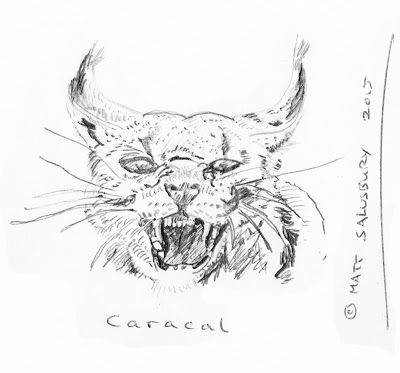 ONE explanations offered for sightings of big cats in Britain is “the escape theory,” the idea that British big cats are introduced exotics that escaped from menageries from Roman times onwards. (See FT 224;38).

The problem with this idea is that there hasn’t been much evidence for historical escapes from circuses or menageries – the occasional escaped circus lion was usually quickly recaptured or shot.

Sure, the Romans had their circuses and wealthy Romans in Britain may have kept exotic big cats as pets. The huge Londinium amphitheatre under what’s now The Guildhall in the City of London had foundations showing signs of there having been a massive gates – and smaller sliding gates – suitable for releasing big animals into fights with gladiators in an arena that could have seated a quarter of Londinium’s population.

The Roman army included specialist venatores troops whose role included capturing wild animals, probably for the arena. Several Roman camps in Britain including Caerleon (Newport) had small arenas, more likely for the entertainment of the troops than for drilling. Venatores would have captured wild animals to be slaughtered before the crowds in local military arenas, their skins then being used for the headgear of legionary standard bearers.

We know venatores were active in Britain – the poet Martial describes seeing a Caledonian (Scottish) bear brought all the way to the Colosseum in Rome for its inaugural games. Mini-circuses involving animals – even imported ones – were cheaper to put on for the enjoyment of the legionaries than gladiatorial games. (“The Venatores – animal hunting in the army”, Duncan B Campbell, Ancient Warfare, Vol. XII, issue 5, Karwansaray Publishers, Rotterdam 2019.)

The bones of leopards have been found in a rubbish heap in Ancient Rome, with leopard remains unearthed in a Roman legionary camp in Dacia (modern Romania). The Emperor Gordian was recorded in AD 241 as having “60 tame lions” in his game parks around Rome, while The Augustan History, the Three Gordians, notes that “Caesar’s herd” had a facility to accommodate new arrivals at Laurentium, near the port of Ostia.

Most of the traffic in captured exotics, though, led to Rome rather than to the outlying province of Britannia. Homo Tyrannicus – A history of man's war against animals (Peter Verney, Mills & Boon, London 1979) recounts how the Eternal City’s demand for ventationes – combats between animals or between men and animals in the arena – all but wiped out African elephants in Tunisia and Libya during the Roman period. By the time of the birth of Christ, lions were rare in Libya and were later driven to extinction in much of North Africa and the Middle East to feed the games. 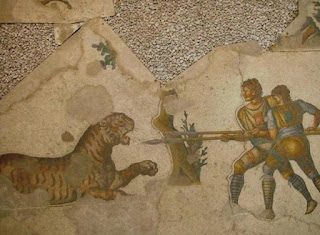 Venatores hunting a tiger from a mosaic in Istanbul, Wikimedia Commons

While ventationes continued right up to Rome’s final collapse, long after gladiatorial combats between humans had gone out of fashion, later Roman circuses featured huge herds of deer to make up the numbers. Circuses had by then already stripped the Empire of big cats and other exotics. As the Empire shrank, acquiring and bringing to Britannia whatever big cats remained in its territory became harder. The whole point of shipping over such animal was to kill them in front of a crowd. All this makes the prospect of exotic big cats surviving and escaping into the Romano-British landscape sometime before the legions abandoned the province in AD 410 a remote one. Nor is there any archaeological or documentary evidence.

Until now. Yes, that’s right, there’s new evidence for a big cat in Roman Britain. Well, not exactly a big cat, but an exotic introduced species of respectable-sized wildcat. The latest edition of The Annual – Bulletin of the Norfolk Archaeological Research Group (No. 27, 2018) includes “Some faunal remarks on the Aylesham Roman Project 2016/17 – a dog, a beaver tooth amulet and animal marks on tiles” by archaeologist Julie Curl. This looks at finds from the site of a Roman villa with a pottery and two kilns in Aylesham, Norfolk, excavated in 2016.

Here wet clay tiles were left out in the sun to dry, some ended up in a rubbish heap after various animals had walked over them and left their footprints in them – a pine martin, a European wildcat, newts and a small dog. One tile in particular has three toe marks of which Curl comments, “At this stage of the investigation, the prints compare well both in size and shape with the Caracal.” Lynxes survived in northern Britain until Saxon times (their range limited to further north than Norfolk) but Curl says the toe marks are “more oval” and slightly too pointed for a lynx. A caracal is the best match.

A caracal is a species of long-legged wildcat, easily twice the size of a domestic cat, red-brown in colour with long, elaborately tufted black ears (its name comes from the Turkish for “black ear”). Caracals now live in the wild in Africa and Asia. Turkey – where caracals are now very rare – is currently the nearest place to Britain to find them in the wild; their range in Roman times would have been greater.

Caracals are known to have been kept as pets by wealthy Romans; ancient Egyptian art shows caracals wearing collars. It’s not clear whether the caracal walking over tiles in Aylesham was a pet or a feral that had escaped, although most of the tracks found on the site were made by wild animals. Curl speculates that our Romano-British caracal could have been an “escaped pet, status symbol, performing animal or curiosity.” It wouldn’t have been impressive enough for the circus. While we know Romans used caracal pelts to make cloaks, its skin would also have been too small to end up as a standard bearer’s headdress.

The Dangerous Wild Animals Act requires owners to have a licence to keep a caracal, which needs to be on a lead and accommodated in a “secure outdoor area” with CCTV. In the days of the British Raj, normally solitary Indian caracals were trained to hunt in packs for birds or hares, but the drawback with caracals was they were reluctant to surrender their prey – they were never regarded as being all that tame. Caracals are, to put it mildly, a bit of handful for their owners. So a “pet” Romano-British caracal could easily turn into an exotic escapee.

Whether it was a pet or escapee, this discovery introduces something new and exciting to the “British big cats” controversy. Could there have been caracals loose in Roman times, and possibly later? 350 years of Roman occupation is enough time for an awful lot of caracal escapes.

The Mabinogian, a series of Welsh tales collected in the 11th century, describes a giant wildcat, the Cath Palug, or “scratch cat.” Could the descendants of the Roman caracal from Aylesham be it? 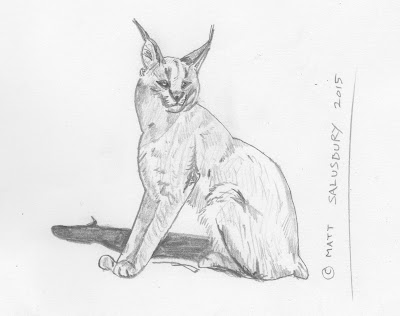 Could Romano-British caracals have hybridised with British lynxes, or with Roman domestic cats – more like African wildcats than today’s moggies – or with the European wildcats then endemic to England, injecting exotic genes into Britain’s feral cat or wildcat populations?

Hybrids of caracals and domestic Abyssinian cats have been recorded – they’re known as “caracats”, they’re still quite a lot bigger than domestic cats and have the luxurious tufted ears of the caracal, without their difficult temperament.

A 1997 census of exotic wildcats in the United States listed three hybrid cats of the “Caracal/Lynx” type. However, caracals (Caracal caracal) are sometimes called “caracal lynxes” or “African lynxes” because of their lynx-like tufts, although they are not that closely related to lynxes. Official publicity photos of an animal in London Zoo in the 1950s, for example, were captioned “caracal lynx” at the time.

Although caracals share with lynxes the tufted ears, caracals are actually in a distinct sub-family along with servals (Leptailurus serval) and African golden cats (Caracal aurata.) The Eurasian lynx (Lynx lynx) belongs to a different sub-order of the Felidae (cats) family than the caracals. Any “caracal lynx” hybrids are thought to be dubious and misnamed. (See the Messy Beast website.) 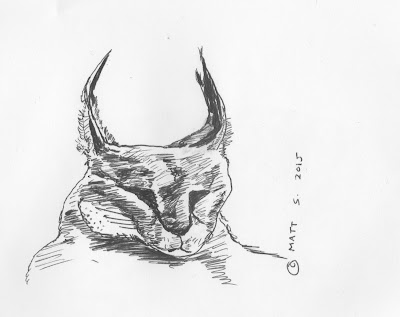 This is not an image of the footprint possibly of a caracal in Alyseham. For copyright reasons I do not have it. This photo shows the paw print of a domestic animal ona Roman tile from around Londinium in the London Museum. There's some interactive task that asks visitors to identify the animal, so I won't spoil it by revealing what it is 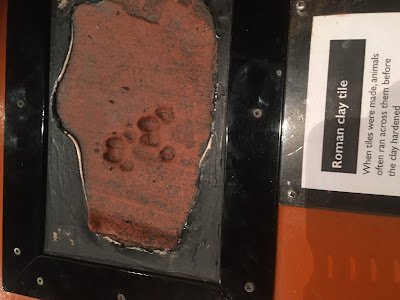 Nice article. Thanks for sharing.
Inkmonk

Smartphones are extremely sensitive to external damage. So it's best to protect with a case. Get your custom design embedded personalized Phone Case from Printo.